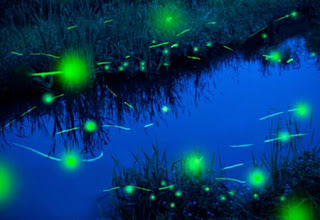 As with most July 4th holidays, images of barbecues, fireworks, and fireflies are running through my mind.  I remember one year, lighting snakes outside my childhood home for hours, and being told not to run with sparklers.  I ran with them anyway, because the patterns they burned into your retinas after being waved haphazardly through the air were worth the risk of second-degree burns.  Maybe you disagree, but as a ten-year-old, I liked to live on the edge.  When no one was looking, I sometimes ran with scissors, too.

Another year, visiting family out of state, my uncle decided to entertain us with his own fireworks display, using what I can only estimate to have been military-grade explosives, and ended up blowing a decently sized crater in the end of his driveway.

The last few years, I'd been going to see the fireworks display in State College, Pa, which is extraordinarily beautiful, and timed to a score of tunes that set your heart pounding (if you could tell the difference between your heartbeats and the reverberations from the fireworks exploding through your body, that is).  This year will be my first Fourth of July where independence has a particularly strong meaning in my life, and I intend to spend it with someone who embodies my hope for the future, in an adventure to upstate New York.  In a break of tradition, I'll forge a new association with Independence Day in my mind, and create a new standard of living for myself without the threat of terminal illness hovering over my head.

Because, you see, I have this keychain.  On the front of the keychain, my initials are engraved in large capital letters.  And on the reverse side is a date with a ribbon.  The date is 12-1-12.  My parents bought me this keychain and handed it to me the day after I was finished with treatment for stage 3 melanoma.  That day was December 1st, 2012.  Now, for some reason, the coming of Independence Day this year has triggered that memory in my mind.  It's made me recall how I felt when I was finally done with immunotherapy -- the relief, the uncertainty, the conquest, the hope, and all the whirlwind emotional static that clung to my neural pathways and wouldn't let go.

Today, Independence Day means something more for me.  It's an independence from cancer.  It's a day I can celebrate and remember the time I was handed a keychain, and told that I had earned my independence, if not only for a short time.  Because I was lucky enough to have gotten through my ordeal, that doesn't mean that it'll never threaten my life again.  It means that I now have the opportunity to appreciate my independence from tragedy with every new breath, and every sunrise.

Feeling independent from political tyranny suffered two hundred years ago is one thing, and celebrating the birth of a nation is a worthy cause that should never be taken for granted.  But there are other things that are important to feel independent from: things in life that are just as tyrannical as an oppressive colonial-era government, if not more.  I've told you what I feel independence from, and that gives me hope for the future.  Not to live a life for a certain amount of years, but to live with a certain amount of fulfillment.  To be able to fully enjoy my time independent from the terrible disease that haunted me in the past.  And I know that it may come back some day, but for now, I'm going to enjoy my independence.  I hope that even if it were to return, I'll still maintain some small wisp of this same attitude, whenever I flip over the keychain that my parents handed to me, and gaze at the date when I truly gained my independence, and for the first time really understood what it meant to do so.

What's your Independence Day, if you have one?  And, if not, what is it you wish you were independent from, and how can you make this happen?
Posted by Anonymous at 7/04/2013